Descended from a Travel-worn Satchel

“I've worn out my body in journeys that are as aimless as the winds and clouds, and expended my feelings on flowers and birds. But somehow I've been able to make a living this way, and so in the end, unskilled and talentless as I am, I give myself wholly to this one concern, poetry.”

— Matsuo Bashō, writing in a letter to a friend.

Praise for Descended from a Travel-worn Satchel

Chris La Tray is skillful in the craft of brevity, as demonstrated in his One-Sentence Journal. In Descended from a Travel-worn Satchel he displays his talent in the art of short-form poetry, through contemporary haiku and haibun. Offering up poetic evidence of the times he inhabits, he secures his place as a descendent of master Bashō.

The debate rages on whether Matsuo Bashō (d. 1694) — innovator of the haiku and haibun literary forms — was the greatest poet of Japan. In any case, one thing is for certain: he has guided many a poet with his instruction to ‘Follow the Creative’ and inspired many more to take to the road and to cultivate a love of place. One of these far-flung, well-seasoned disciples is none other than Chris La Tray, award-winning Métis poet and writer from Montana.

In Descended From A Travel-Worn Satchel, we are given a deep gift as readers. We are shown, by-example, what it means to be a wakeful-wayfarer; one fully-present to the moment, the road, the lessons of time, history, and the natural world. Through a weave of pithy poems and pull-no-punches travel writing, La Tray embodies the best principles of Bashō, but he does so in a way that is utterly and uniquely his own.

— Frank La Rue Owen, author of The School of Soft-Attention

The noble mantle once belonging to the Zen poet, Matsuo Bashō, and now patched with duct tape, has landed on the broad shoulders of a Métis writer living in western Montana in the early 21st century. Chris La Tray writes about a Cooper's hawk and waft of dry alfalfa, but also of collapsing ice sheets, visiting Indian reservations during the pandemic, and running out of money. With humor, sensitivity, and a clear eye for “what is,”  La Tray distills years of close attention, telling a story of four seasons in formally deft haiku and haibun.

Wherever he goes and whatever the object of his interest, “love swells in small things,” resulting in a companionable collection that feels truly timeless in its themes and insights. I’ve shelved Descended from a Travel-Worn Satchel beside its kin, which include Andrew Riutta’s Cigarette Butts and Lilacs and Gary Snyder’s Mountains and Rivers Without End. I thoroughly enjoyed this book and you will, too.

— Holly Wren Spaulding, author of Familiars and other books

This book has “myriad duck butts.” If that's not enough, it also has freshly sharped pencils, old cats, newborn birds, sweet achy loneliness, a little anger, a lot of joy, midnight strolls, garden hoses, and dynamic weather. Hemingway said, Remember to get the damn weather in your book. I say, Remember to get Chris La Tray on your damn bookshelf. His is the art of noticing and appreciating, and his is the work of reminding readers—every single one of us—that we too can be artists in this way.

— Leath Tonino, author of The West Will Swallow You and The Animal One Thousand Miles Long

What kind of moments do you live for? Read Chris La Tray’s collection of haiku, Descended from a Travel-worn Satchel, and you may just find yourself paying closer attention to what arises when you’re honest with yourself about how to answer such a question. Read it not because I’m telling you to, but because as you walk alongside the poet and his observations, the connections he makes, and the wonder he experiences, you may just find yourself tapping into that which fuels your next step forward, or that which reminds you what’s yours to love. Read it because you’ll be all the more ready to pick up your own satchel and continue the journey. I certainly am, and this collection, full of wry humor, poignant reflections, hard truths, and the beauty of ordinary things, will be a companion on the way for years to come.

Chris La Tray is a Métis writer and storyteller. His first book, One-Sentence Journal: Short Poems and Essays From the World At Large (2018, Riverfeet Press) won the 2018 Montana Book Award and a 2019 High Plains Book Award.

His upcoming book, Becoming Little Shell, will be published by Milkweed Editions in 2022.

Chris is an enrolled member of the Little Shell Tribe of Chippewa Indians and lives near Missoula, Montana.

Clare Carpenter owns and operates Tiger Food Press, a one-woman print studio located in Portland, Oregon, between the Willamette and Columbia Rivers, where she produces linocut art prints, block printed textiles, letterpress printed paper goods, and small gift items. Her work is influenced by nature, from the wilderness of the west and camping trips in the Cascades, to the tamer realm of the vegetable garden. 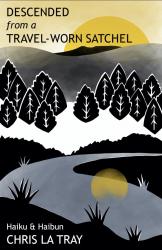