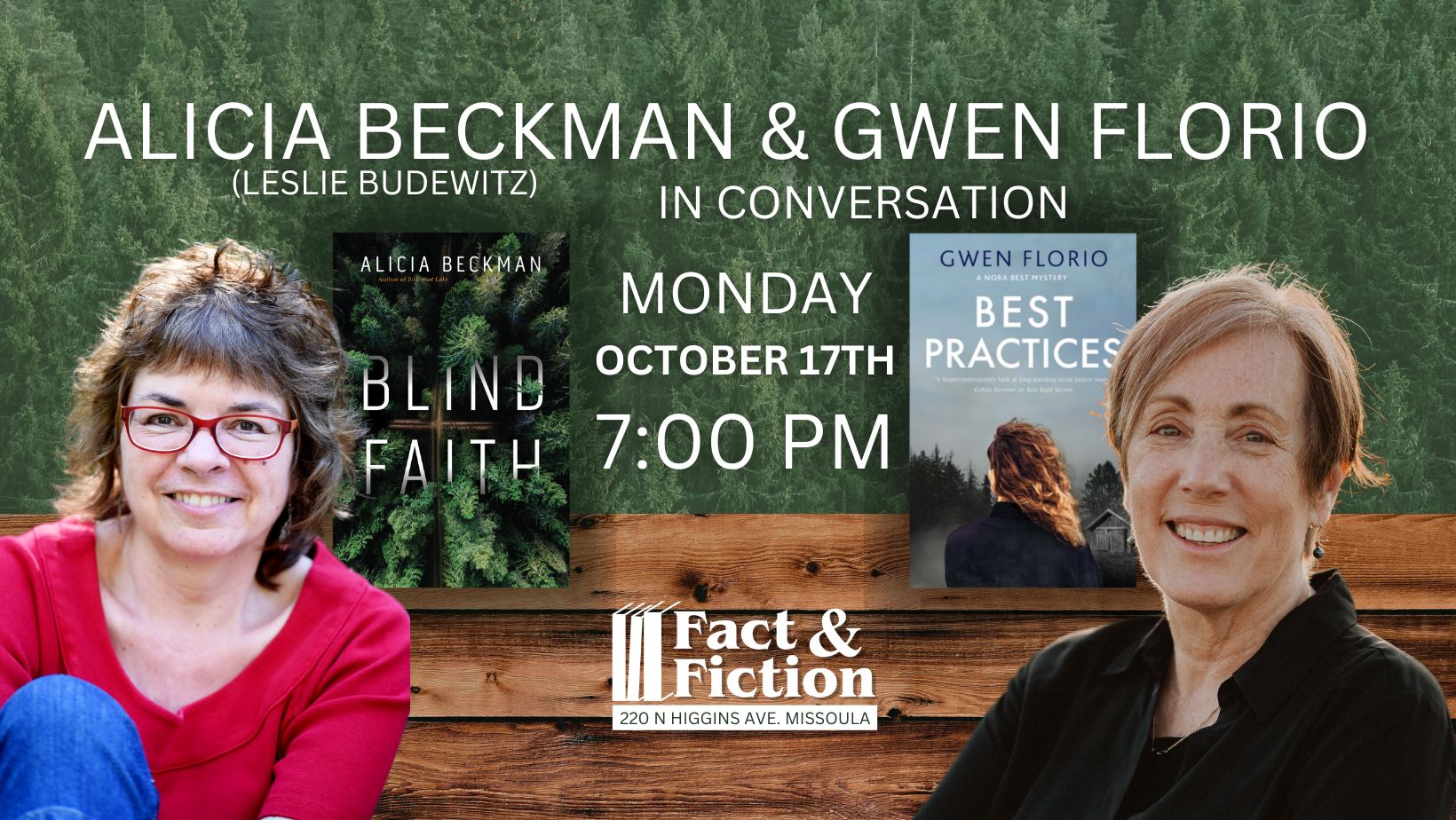 Join us on Monday, October 17th at 7 PM for the book launches for Blind Faith by Leslie Budewitz writing as Alicia Beckman and Best Practices by Gwen Florio!

About Blind Faith: Long-buried secrets come back with a vengeance in Blind Faith by award-winning author Leslie Budewitz writing as Alicia Beckman.

For decades, the unsolved murder of Father Michael Leary has haunted Billings, Montana, the community he served. Who summoned the priest late one autumn night, then left his body in a sandstone gully for the ravens and other wild scavengers?

And it’s haunted no one more than Lindsay Keller, who admired and confided in him as a teenager. Compelled by his example to work for justice, she became a prosecutor. But after a devastating case left her shattered, she fled the rough-and-tumble for the safety of a desk, handling real estate deals and historic preservation projects. Good work, but not what she’d dreamed of.

Now Lindsay finds herself in possession of the priest’s wallet, the photo of a young girl tucked inside. She’s sure she knows the girl, and that it’s tied to his death. But how?

Detective Brian Donovan, a hot-shot Boston transplant, would like nothing more than to solve the county’s coldest case. Probing the life and death of Father Leary takes Lindsay and Donovan deep into long-simmering tensions in this seemingly peaceful place.

Then another woman far away digs up unexpected clues about her own family’s past—a history rooted in a shocking truth—and her questions bring her to Lindsay and the detective. But the dangerous answers could rock the community to its very core.

About Best Practices: A tense and claustrophobic mystery set in the Montana wilderness starring Nora Best.

Nora Best is starting her life over . . . again. Spotting a 'team leader' job with a therapy program for troubled girls at Serendipity Ranch, Nora thinks it's the perfect role. She'll be surrounded by the beautiful Montana wilderness and be able to make a difference in the kids' lives.

All is going well until it's revealed a girl recently died at the ranch. The other girls are struggling with the loss. The official line is she jumped from a cliff, but she was afraid of heights and would have struggled to get there alone.

As trouble at the ranch escalates and another shocking discovery is made, Nora's determined to find out the truth to protect the girls. However, with her recent troubles, the local community, police and program leaders won't take her seriously. Can Nora overcome her past to help the girls, or are the girls using her past to help themselves?

Leslie Budewitz is a three-time Agatha Award winner and the best-selling author of the Spice Shop mysteries, set in Seattle, and Food Lovers’ Village mysteries, inspired by Bigfork, Montana, where she lives. The newest: Peppermint Barked, the 6th Spice Shop mystery (July 2022). As Alicia Beckman, she writes moody suspense, beginning with Bitterroot Lake and continuing with Blind Faith (October 2022). Leslie is a board member of Mystery Writers of America and a past president of Sisters in Crime.

Longtime journalist Gwen Florio moved to crime fiction in 2013 with her first novel, Montana.  It won the Pinckley Prize for Debut Crime Fiction and a High Plains Book Award and launched a series termed “gutsy” by the New York Times. Best Practices, the third in her Nora Best series, was released Sept. 6 by Severn House and The Least Among Us (Penguin Random House/Crooked Lane), featuring public defender Julia Geary, launches Dec. 6.