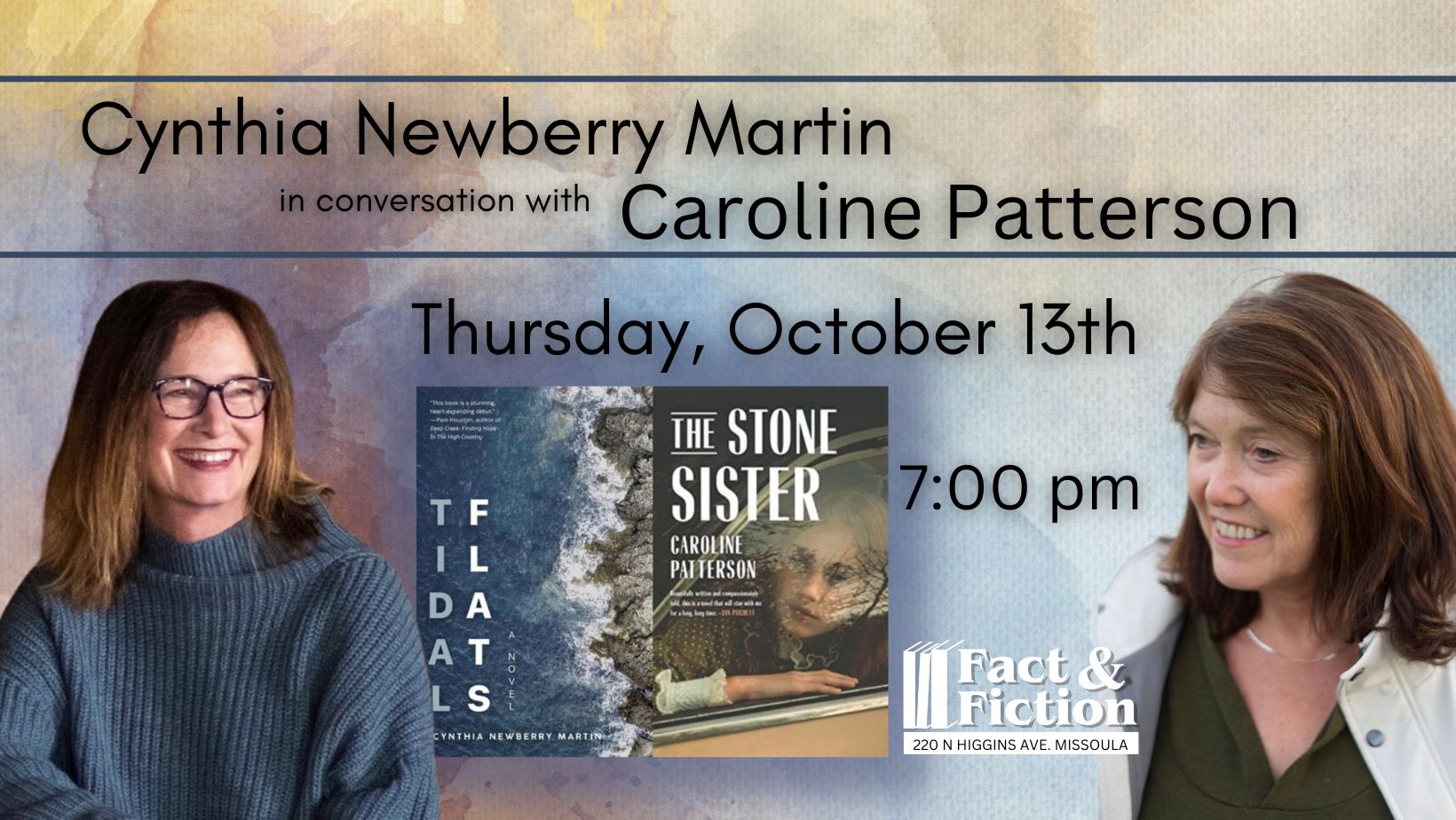 Join us on Thursday, October 13th, at 7 PM for a conversation between authors Cynthia Newberry Martin (author of Tidal Flats) and Caroline Patterson (author of The Stone Sister).

In this elegant and honest novel, Cass and Ethan must navigate fine lines between the things they want individually and the life they want together, and it appears each will have to compromise...

Mary Cassatt Miller falls for famous photojournalist Ethan Graham. For months at a time, Ethan's work takes him to Afghanistan, and Cass, whose passion is her job in Atlanta, wants a husband who comes home at night. Then, there's the conflict around growing their family―he wants one; she doesn't. Will this divide lead to marriage or divorce for these lovers? Can they keep the romance alive without losing their sense of self?

Nine weeks before their third anniversary, Cass wonders whether Ethan will try to squeeze in one final trip to Afghanistan. When he does, she's unsure if he will ever give up the work he loves. And if he won't, well, she will not repeat the life her parents had. As the clock counts down, it doesn't help that Singer, the artist-bartender, is always in Atlanta, and the enthralling Setara, the subject of Ethan's most famous photograph, is also his business partner. Along with the temptation of new lovers, danger in Afghanistan changes everything.

Spanning the mid to late 20th century and set in the Elkhorn Valley of southwestern Montana, The Stone Sister is told from three points of view - a father's, a nurse's, and a sister's. Together they tell the unforgettable story of a child's birth, disappearance, and finally discovery in a home for "backward children." Robert Carter, a newly married man just back from World War II, struggles with his and his wife's decision to entrust the care of their disabled child to an institution and "move on" with family life. Louise Gustafson, a Midwestern nurse who starts over with a new life in the West, finds herself caring for a child everyone else has abandoned. And Elizabeth Carter, a young journalist, uncovers the family secret of her lost sister as she struggles with starting a family of her own.

The Stone Sister explores the power of family secrets and society's evolving definitions of "normal"-as it pertains to family, medicine, and social structure. The novel sheds light on the beginnings of the disability justice movement as it follows one family's journey to reckon with a painful past. Incredibly, the novel is based on Caroline Patterson's personal story. As an adult, she discovered she had an older sister with Down syndrome who had been written out of her family history. In fact, that sister's name was also Caroline Patterson.

Cynthia Newberry Martin writes from her soul. She mainly writes about how characters can navigate between separateness and togetherness in a healthy way. Her stories, essays, and reviews have appeared in Hunger Mountain, Brevity, Gargoyle, Contrary Magazine, Clapboard House, Storyglossia, Numéro Cinq, etc. For a number of years, she served as the Review Editor for Contrary Magazine and the Writing Life Editor for Hunger Mountain. In 2012 she graduated from Vermont College of Fine Arts with an MFA in Creative Writing. Later that year, she was awarded a residency at Ragdale. In 2013, she became a founding board member of the literary nonprofit Writing by Writers. She spends her days in Columbus, GA, with her husband, and in Provincetown, MA, in a little house by the water. For more about Cynthia and her writing, please check out her website at www.cynthianewberrymartin.com.

Caroline Patterson is the author of Ballet at the Moose Lodge and two children's books on the natural world. She edited the literary anthology Montana Women Writers: A Geography of the Heart. Her short fiction and essays have been published in journals including Epoch, Outside, Southwest Review, and Seventeen, and have been included in anthologies including A Million Acres, Montana Noir, Bright Bones, and The New Montana Story. A graduate of the University of Montana creative writing program in fiction, she was awarded the Wallace Stegner Fellowship in Fiction at Stanford University, the Joseph Henry Jackson Prize from the San Francisco Foundation, a Vogelstein Foundation Award, and the Montana Arts Council Fellowship. She's received residencies at Ucross, the Virginia Center for the Creative Arts and Ragdale. She is currently the executive director of the Missoula Writing Collaborative, which places writers to teach creative writing in more than 34 elementary schools in rural, urban, and reservation schools across western Montana. She lives with her husband, writer Fred Haefele, in the Missoula home her great-grandfather built in 1906, which he built on the banks of the Clark Fork River where, he told his five-year-old son back in Chicago, they could throw stones in the water and the family could come and cut out all worrying. Her two grown children visit on Sundays for dinner and laundry.