On a Benediction of Wind: Book Launch with Poet Charles Finn and Photographer Barbara Michelman 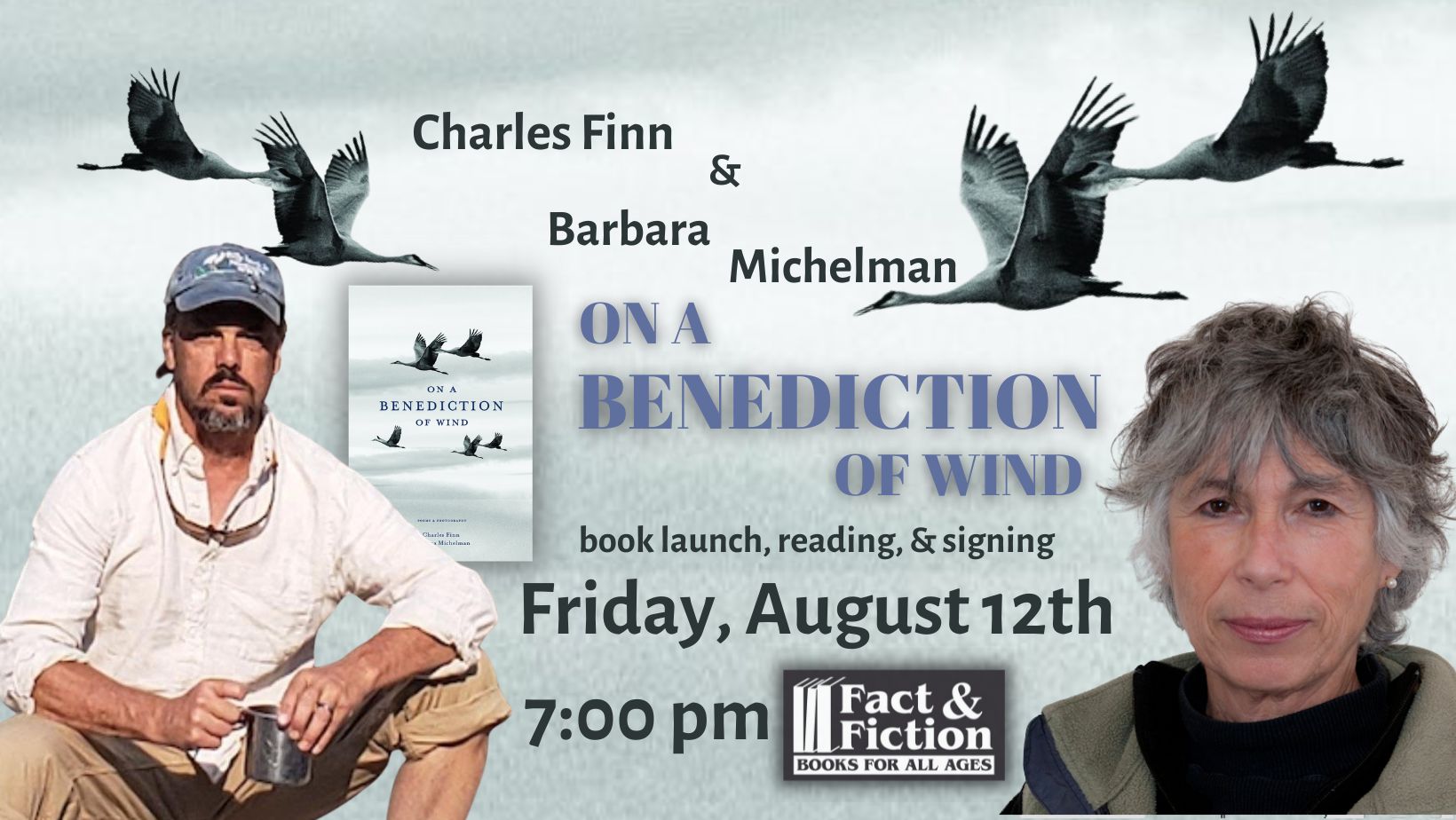 Join us on Friday, August 12th, at 7 PM for the book launch of poet Charles Finn and photographer Barbara Michelman's new book ON A BENEDICTION OF WIND.

On a warm summer evening in Montana’s Bitterroot Valley, surrounded by friends, photographer Barbara Michelman sat across from author Charles Finn at a long outdoor table. Bound on the West by the Bitterroot Mountains and the East by the Sapphires, it was there the two were first inspired to collaborate on a project that would ultimately be ten years in the making, a pocket-sized book of poetry and photography, ON A BENEDICTION OF WIND.

In this lyrical work, poetry and image are merged to become reflections of one another. With its emphasis on birds, the innate holiness of nature, and experiences shared by an unnamed couple, ON A BENEDICTION OF WIND, is an invitation to leave the distractions of the modern world behind and listen once again to "the confessions of snow" and "the breathing of stones".

Often when poetry is paired with photography, the words and images sit separately, disconnected. In this book, Michelman and Finn set out to create a conversation between their two art forms. Michelman’s photographs, black and white images from the Pacific Northwest and Southwest, are not narrative supports for the poems, while neither are the poems descriptive monikers of the photographs. Rather each act as a reflection of the other, evoking and enhancing the feeling, emotion, and idea investigated by the first. “What I always wanted was to create a single canvas,” says Michelman, “As if Charles’ words and my photos are a single image.”

“There was an energy that the two art forms traded in,” says Finn, “and we took advantage of that, one leading to the other, back and forth, back and forth, like a call and response between her camera and my pen. Although we feel each poem or photograph can stand on its own, that when placed together they form a third, even more pleasing combination for reader and viewer alike.”

Set to be published August 9th, 2022 by Chatwin Press, for a book that contains photographs, this 6” x 8” volume is unconventional, small on purpose. “When we conceived this work, we knew we didn’t want a coffee table book,” Michelman says. “Instead we wanted a book that readers could live and travel with—and afford. This book is small on purpose. We wanted to create something that would be available to everyone.”

About the artists: Poet Charles Finn is the former editor of High Desert Journal and author of Wild Delicate Seconds: 29 Wildlife Encounters (OSU Press 2012). Originally from Vermont, he is a graduate of Syracuse University, after which he spent 3 years in Hiroshima, Japan teaching English as a foreign language, and later hid out in the woods of British Columbia for 10 where he began his writing career. His essays, poems, and nonfiction have been published in a wide variety of journals, magazines, newspapers, and anthologies across the West and beyond. A self-taught woodworker, he is the owner of A ROOM OF ONE’S OWN where he builds custom micro-cabins using reclaimed lumber and materials, as well as FINNFURNITURE, ART & SCULPTURE building furniture and fine art using found objects and wood. He lives in Havre, MT with his wife Joyce Mphande-Finn and their cat Lutsa.

Photographer Barbara Michelman started in Hollywood and was one of the first women in film lighting. Widely exhibited, with work in public and private collections here and abroad, her recent series on the aftermath of fires in the West, Fire on Every Mountain, was awarded Best of Photography at the Wild and Scenic Film Festival in California, was also exhibited  in the   ongoing  global exhibition Extraction: Art on the Edge of the Abyss, which will be archived at the Nevada  Museum of Art.   She holds a degree in Philosophy from UC Berkeley and lives in Missoula, MT.