Grounded: A Conversation with Senator Jon Tester and Jeff Ament 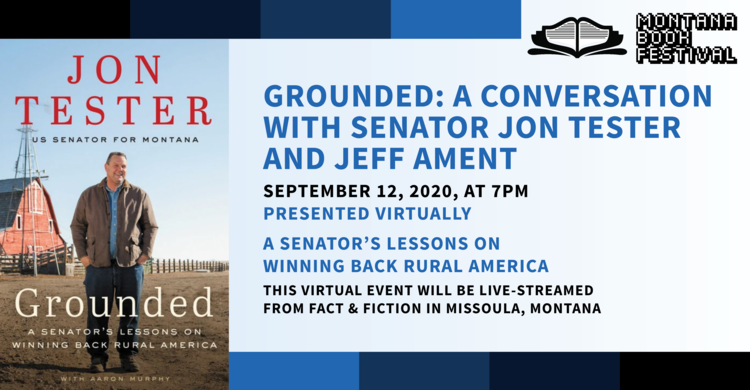 Senator Jon Tester discusses his new memoir, Grounded: A Senator’s Lessons on Winning Back Rural America, with Jeff Ament of Pearl Jam, the band that helped put Tester on the map. This event will be moderated by Grounded co-author Aaron Murphy.

Senator Jon Tester is a rare voice in Congress. He is the only United States senator who manages a full-time job outside of the Senate—as a farmer. But what has really come to distinguish Tester in the Senate is his commitment to accountability, his ability to stand up to Donald Trump, and his success in, time and again, winning red state voters back to the Democratic Party.

In Grounded, Tester shares his early life, his rise in the Democratic party, his vision for helping rural America, and his strategies for reaching red state voters. Leaning deeply into lessons on the value of authenticity and hard work that he learned growing up on his family’s 1,800-acre farm near the small town of Big Sandy, Montana—the same farm he continues to work today with his wife, Sharla—Tester has made his political career a testament to crossing the divides of class and geography. The media and Democrats too often discount rural people as Trump supporters; Tester knows better. His voice is vital to the public discourse as we seek to understand the issues that are important to rural and working-class America in not just the 2020 election but also for years to come.

A heartfelt and inspiring memoir from a courageous voice, Grounded shows us that the biggest threat to our democracy isn’t a president who has no moral compass. It’s politicians who don’t understand the value of accountability and hard work. Tester demonstrates that if American democracy is to survive, we must put our trust in the values that keep us grounded.

Aaron Murphy joined MCV in May of 2019 following two years as Chief of Staff to U.S. Senator Jon Tester (2017-2019). He previously served as Tester’s press secretary and communications director (2006-2013) and he is the co-writer of Tester’s 2020 memoir, Grounded: A Senator’s Lessons on Winning Back Rural America. Aaron spent several years as a principal at Hilltop Public Solutions (2013-2016), where he ran and consulted for high-profile political campaigns and various conservation projects across the nation. He ran a campaign to protect sacred Snoqualmie Falls from development in Washington State, and was honored with a blanketing ceremony by the Snoqualmie Tribe. A former TV news producer and Yellowstone Park Ranger, he is a 2001 graduate of the University of Montana and a native of Cody, Wyoming.

Tickets include a unique link to the virtual event and a SIGNED copy of Grounded.