The Remarkable Cause: Reading and Book Signing with Jean O'Connor 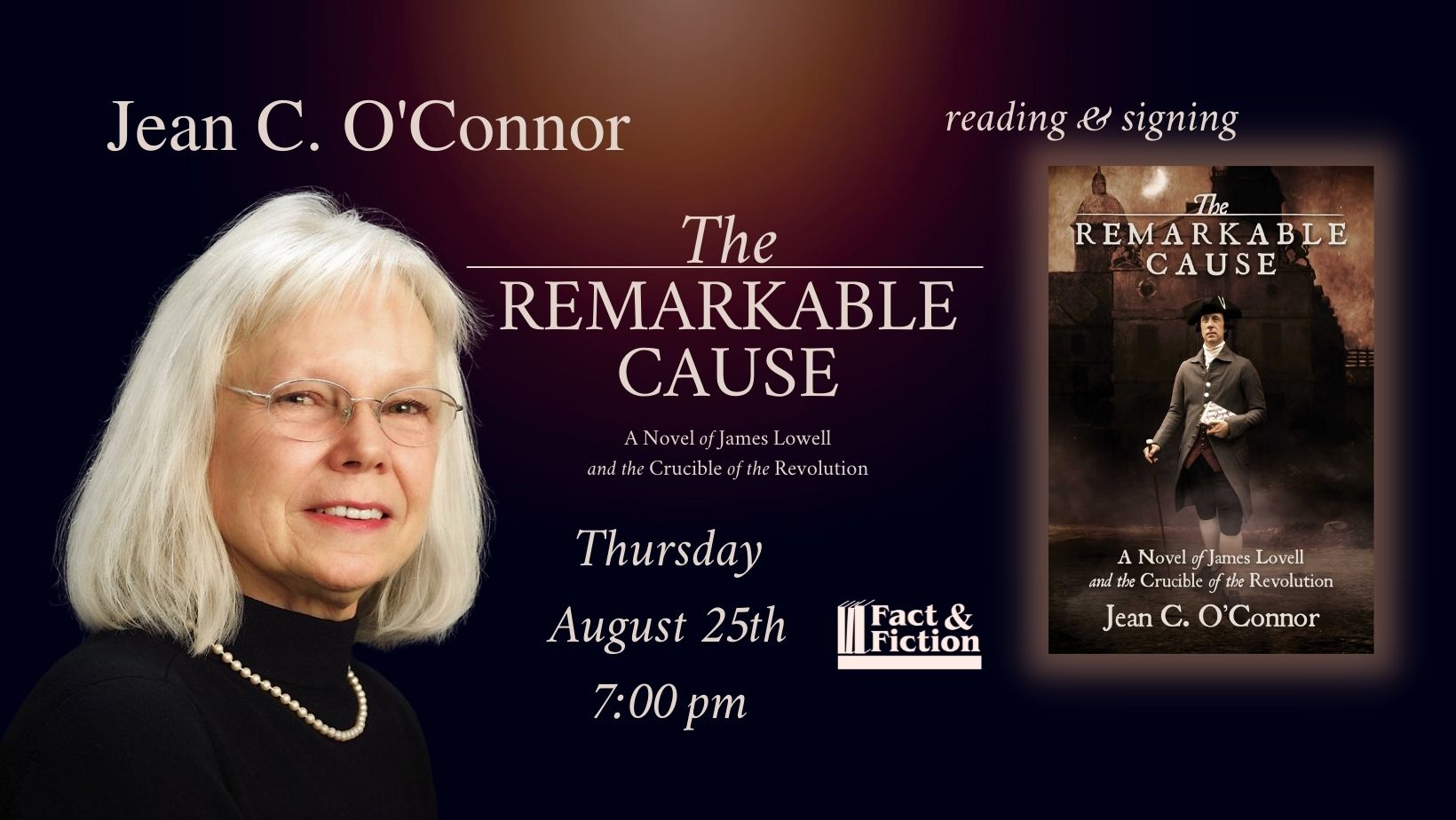 Join us on Thursday, August 25th, at 7 PM for a reading and book signing with author Jean O'Connor from her recent book THE REMARKABLE CAUSE: A NOVEL OF JAMES LOVELL AND THE CRUCIBLE OF THE REVOLUTION.

James Lovell desperately wants to help the American cause, but alone in a cold, dark cell in the Boston Stone Jail, his dreams seem a faint illusion.

In icy March winds, pounded by the Americans' cannon, General Howe evacuates British troops and Loyalists from Boston. James Lovell is forced into a ship bound for Halifax, while his father and family take passage for the British stronghold in the ship's upper berth. In jail in Halifax, James can only write letters and pray for release, hoping General George Washington will hear his appeal.

In THE REMARKABLE CAUSE, experience conflict and courage in the roots of the American Revolution:

Jean C. O'Connor, a high school English teacher for over thirty years, researched this story using letters, journals, and documents written by James Lovell and his contemporaries. Inspired by a few sentences in her grandmother's journal, Jean discovered details of that time far away--yet still relevant. Images from early newspapers and pictures enliven the narrative's pages.

About the author: Growing up in New England, Jean C. O'Connor developed a fascination with the American history evident in so many landmarks there. Her grandmother's house in Andover, Massachusetts, has a historic plaque by the front door; the Marquis de Lafayette made a speech from its steps when he came to visit the new United States following the Revolutionary War. Her enjoyment of history as well as literature led to a teaching career of thirty-seven years in Montana, particularly in Helena, the capital. She is passionate about meaningful learning experiences for students, and about working with teachers. Her work with the state teachers' association led to her receiving the Montana Association of Teachers of English Language Arts Distinguished Educator Award. As an educator, she received the NCTE High School Teacher of Excellence Award 2018, one of only fourteen teachers in the country. A few lines in her grandmother's journal inspired her interest in the story that forms the basis for THE REMARKABLE CAUSE: A NOVEL OF JAMES LOVELL AND THE CRUCIBLE OF THE REVOLUTION.

The Remarkable Cause: A Novel of James Lovell and the Crucible of the Revolution (Paperback)