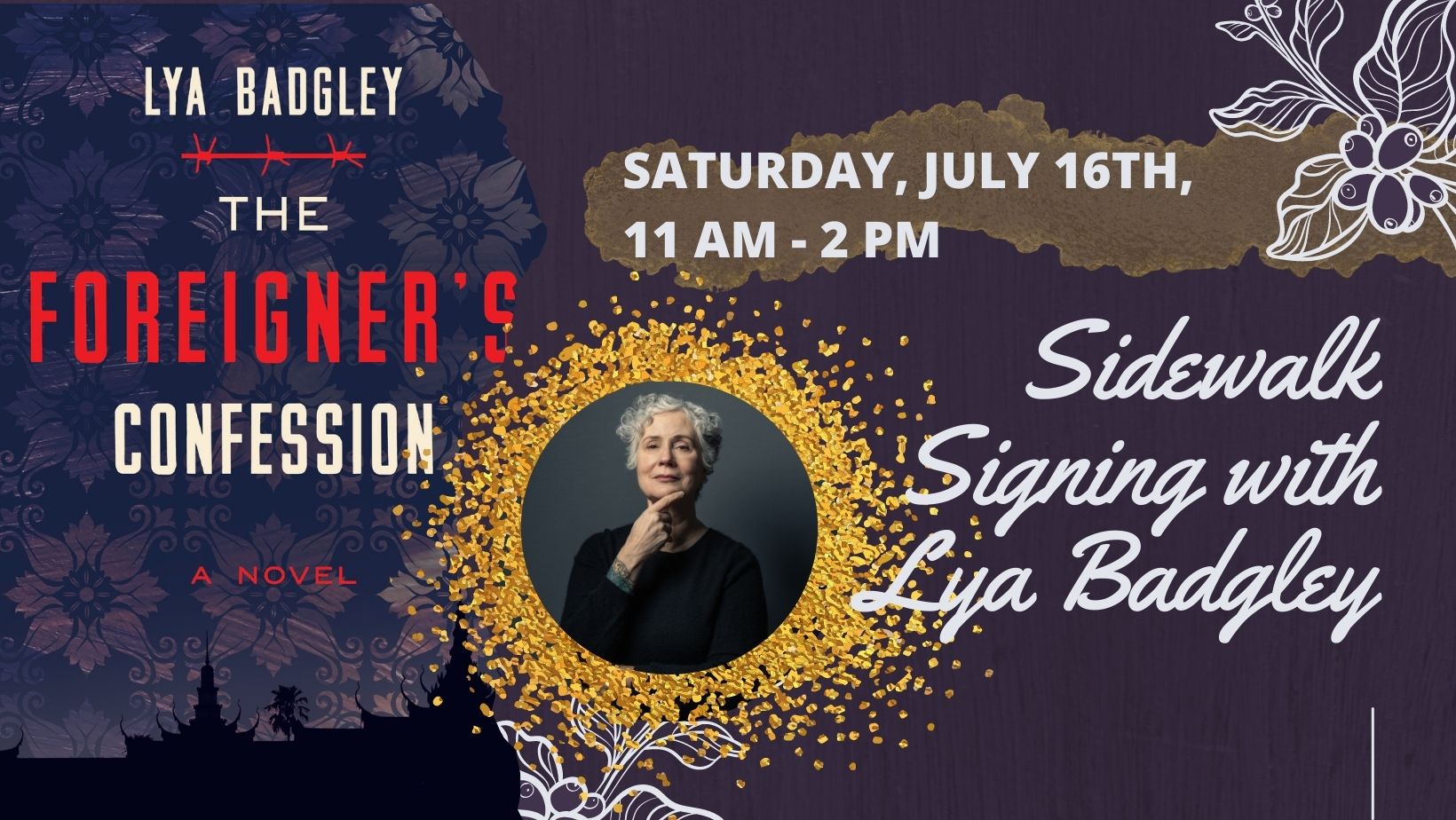 RESCHEDULED FOR JULY: Join us on Saturday, July 16th, for a sidewalk signing with author Lya Badgley from 11 AM - 2 PM for her book, THE FOREIGNER'S CONFESSION.

An unexpected, mysterious discovery in Cambodia leads Emily McLean on a journey through the country’s painful history  toward personal redemption.

After a horrific accident shatters her world and leaves her an amputee, American attorney Emily McLean moves to Phnom Penh, Cambodia to work with landmine survivors. She hopes to reinvent herself in this new land, leaving behind her sense of culpability in the death of her husband and the loss of her unborn child.
While visiting the Tuol Sleng Museum of Genocide, Emily discovers that she shares an eerie resemblance to a portrait of a former prison inmate, Milijana Petrova, a Serbian communist revolutionary who, in the 1970s, became fatally enmeshed with the brutal Khmer Rouge regime. Emily is not the only one who notices the astonishing similarity—her Cambodian driver insists she is the ghost of Milijana, come back to complete a mysterious task.
This unexpected discovery consumes Emily, who starts desperately searching for answers about Milijana in historical documents from Cambodia’s devastating civil war. As Emily begins to uncover more clues about Milijana’s life—from the horrible mistakes she made to the terrible price she paid—similarities between the two women start to emerge, and their stories become intertwined. What happens when life is turned upside down and the boundary between past and present, life and death are blurred? Can Emily’s discoveries help her to finally emerge from the pain of her own past, or will Milijana’s tragic end foretell her own?

About the author:
Author Lya Badgley was born in Yangon, Myanmar and spent much of her life in Southeast Asia.
She moved to the Pacific Northwest in the eighties, where she became a part of the Seattle arts and music scene.
In the nineties, she returned to Asia, where she opened a restaurant in Myanmar, interviewed insurgents for Human Rights Watch, and microfilmed documents at Tuol Sleng Museum of Genocide in Cambodia,
helping to bring war criminals to justice. ​She's been an elected city councilmember and a dedicated environmental activist.

She is fascinated by the culture and customs of the region, which has been a huge inspiration for her writing. Tense war zones and insurgencies offer an intense backdrop for her stories. Political and social upheaval vividly mirrors the personal and sometimes violent transformations of her strong female protagonists.
Badgley lives in Snohomish, Washington with her Serbian husband.