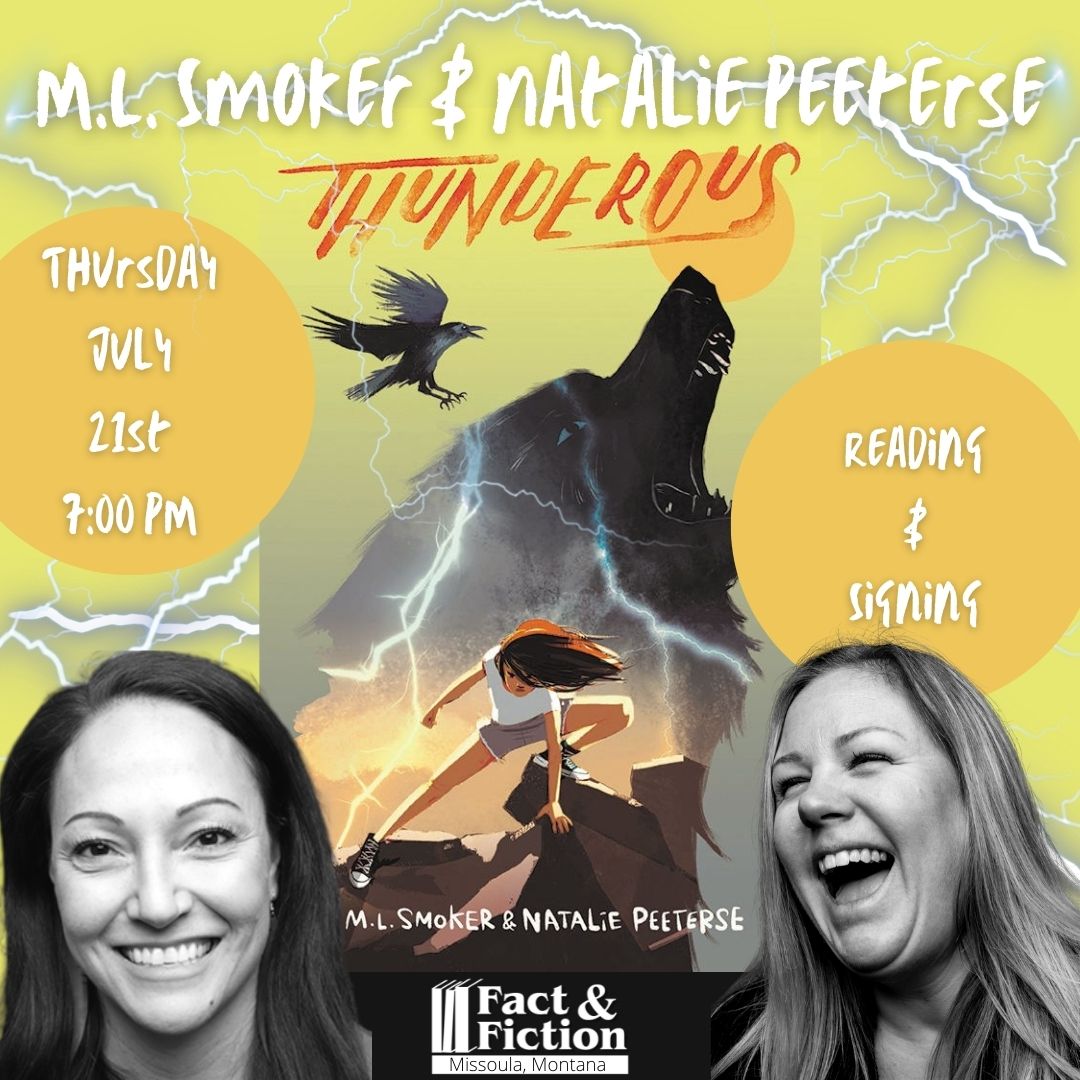 Join us on Thursday, July 21st, at 7 PM for a celebration of M.L. Smoker and Natalie Peeterse's new graphic novel Thunderous.

If Aiyana hears one more traditional Lakota story, she'll scream! More interested in her social media presence than her Native American heritage, Aiyana is shocked when she suddenly finds herself in a magical world with no cell coverage! Pursued by the trickster Raven, Aiyana struggles to get back home, but is helped by friends and allies she meets along the way. Her dangerous journey through the Spirit World tests her fortitude and challenges her to embrace her Lakota heritage. But will it be enough to defeat the cruel and powerful Raven?

About the authors: M.L. Smoker is a member of the Assiniboine and Sioux tribes of the Fort Peck Reservation in Montana. She holds an MFA from the University of Montana in Missoula, where she was the recipient of the Richard Hugo Fellowship. Her first collection of poems, Another Attempt at Rescue, was published by Hanging Loose Press in 2005. In 2009, she co-edited an anthology of human rights poetry with Melissa Kwasny entitled, I Go to the Ruined Place. She received a regional Emmy award for her work as a writer/consultant on the PBS documentary Indian Relay. Smoker served as the Director of Indian Education for the state of Montana for almost ten years. In 2015 Smoker was named the Indian Educator of the Year by the National Indian Education Association and was appointed to the National Advisory Council on Indian Education by President Barack Obama. She currently works at Education Northwest as a practice expert in Indian Education. n 2021, Smoker and poet Melissa Kwasny were named Academy of American Poets Laureate Fellows.

Natalie Peeterse is the co-author of the graphic novel Thunderous. Her poetry chapbook Black Birds : Blue Horse, An Elegy won the Gold Line Press Poetry Prize in 2011. A second poetry chapbook, Dreadful : Luminosity, Letters, was published by Educe Press in the spring of 2017. She was included in I Go to the Ruined Place: Contemporary Poems in Defense of Global Human Rights (Lost Horse Press), and several other anthologies. She has an MFA from the University of Montana and has been a fellow with the Arizona Commission on the Arts, a participant at the Squaw Valley Community of Writers, an artist in residence at the Caldera Institute, a participant in the 2018 US Poets in Mexico in Merida, Yucatan and most recently a Visiting Scholar at the University of Washington’s Whiteley Center at the Friday Harbor Laboratories. She is a recipient of the 2013 Artist Innovation Award by the Montana Arts Council. She lives in Helena, Montana where she works on Open Country Press.