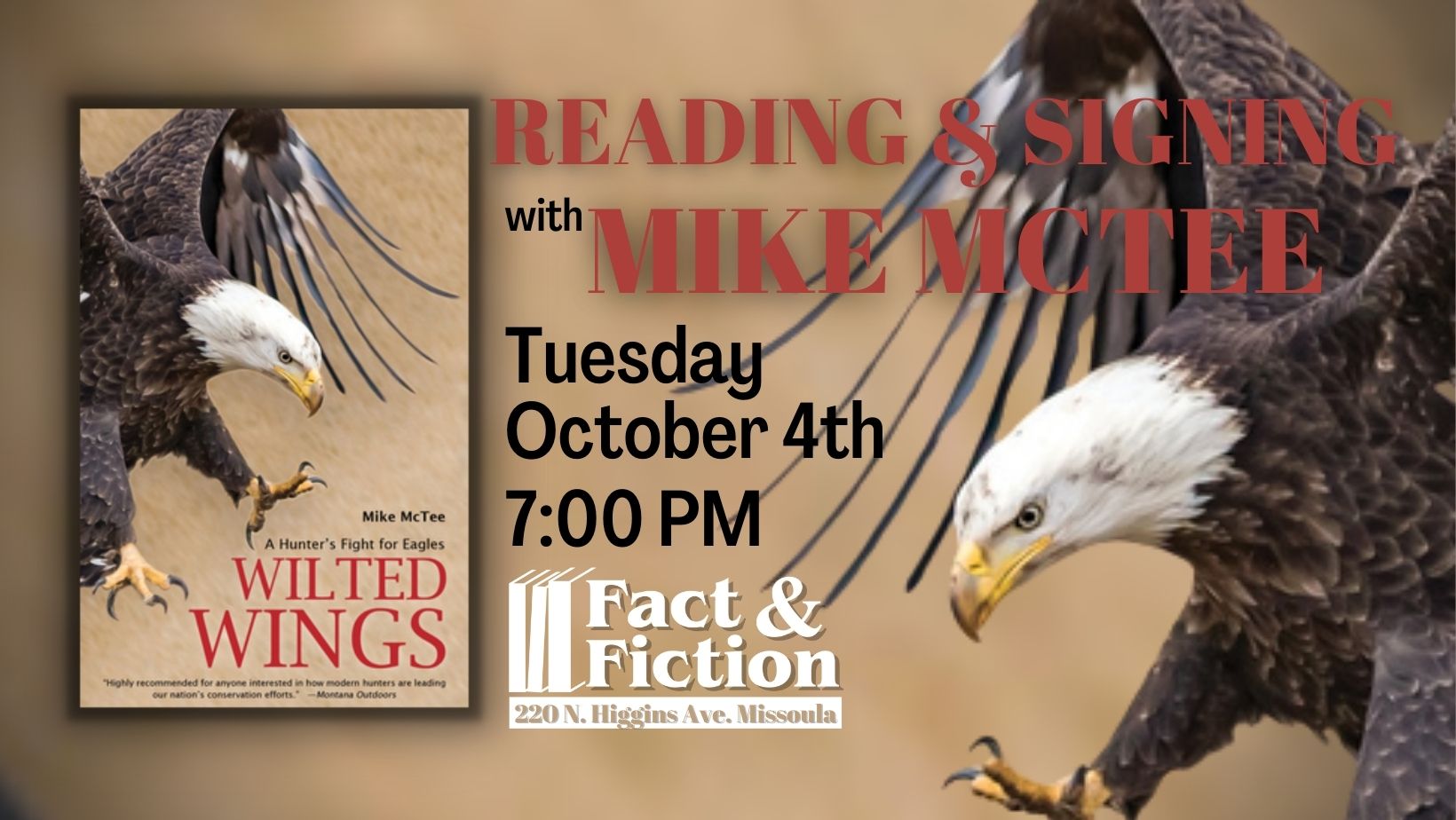 Join us on Tuesday, October 4th, at 7 PM for a reading and book signing with author Mike McTee from his newest book Wilted Wings: A Hunter's Fight for Eagles.

In this groundbreaking work, McTee, a hunter and wildlife researcher in western Montana, exposes a terrifying link between humans and eagles, while building the framework for how to safeguard these iconic raptors.

After years of research and speaking with dozens of raptor experts, McTee discovers eagles across the United States have toxic lead lacing their veins, often from scavenging hunting remains peppered with bullet fragments. Armed with a background in chemistry and a deep knowledge of hunting, McTee latches to the issue, becoming an ambassador for eagles and lead-free bullets.

Weaving hunting stories and eagle encounters, Wilted Wings flies readers from Montana's "Golden Eagle Highway" to wild British Columbia, and to the desolate Mongolian Steppe, where Kazakhs still hunt foxes with eagles. Drawing from historical records, wildlife research, and expert opinions, McTee illuminates the braided natural histories of humans and eagles, framing a path that would strip lead from the diets of these soaring icons.

About the author: Mike McTee shot his first weapon before he could recite the alphabet. Now, understanding weapons is part of his job.

Mike’s career took this trajectory after he gained a B.S. in Environmental Chemistry. Curious about potential pollution at a historic shooting range in Montana’s Bitterroot Valley, he earned an M.S. in Geosciences studying the site. Strangely, the sulfur inside the trap and skeet targets posed the main threat, not the lead in the shotgun pellets. But lead contamination soon grabbed Mike’s focus. Each winter at MPG Ranch, where Mike worked, biologists caught eagles suffering from alarming levels of lead exposure. Mike soon initiated studies on scavenger ecology and began investigating the wound ballistics of rifle bullets, the suspected source of lead. His research has appeared in numerous wildlife and environmental journals.

Mike often connects with the public through his writings and speaking engagements, whether it be to a local group of hunters or a gymnasium full of middle schoolers. He frequently writes about the outdoors, with credits to The FlyFish Journal, Backcountry Journal, Strung, and Bugle. He lives with his family in Missoula, MT.